“When there is no energy there’s no color, no shape, no life.” 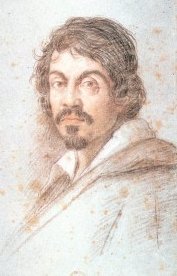 Michelangelo Merisi, called Caravaggio (name taken from Lombard country that gave birth), born September 29, 1571 by an architect in the service of the Marquis of Caravaggio, Francesco Sforza. The painter belonged from a family wealthy enough and estimated. His vocation must have occurred very early, as early as 1584 he entered as a student in the workshop of painter from Bergamo, Simon Peterzano, a pupil of Titian.

It ‘a period in which it makes use of some patrons, including the Sforza, and Colonna, or such as Cardinal Del Monte, which lodges in his palace and the commission still lifes.

In 1592, the restless artist decided to move to Rome, where he is accepted among the servants of Pandolfo Pucci, a local noble. Still not independent is forced to work rather for well-known artists at the time, as Antiveduto Grammar, or Lorenzo Siciliano Giuseppe Cesari known as the Cavalier d’Arpino, a painter of floral subjects, still lifes or religious subjects.
In these years, “was attacked by a serious sickness which, being without money was needed to go to the hospital of Consolation” (Baglione) is the period when he painted the famous portraits in the mirror and “Sick Bacchus” (preserved in the Galleria Borghese ).

The turning point in Caravaggio’s career is marked from the purchase of “The Bari” by Cardinal Francesco Maria del Monte: after this event, he moving to Palazzo Madama, the residence of Cardinal, where he remained until 1600.

The admiration of the cardinal is also shared by one of its important neighbor, the Marchese Vincenzo Giustiniani, who lives in the family palace located a few steps from Palazzo Madama. In addition to the Giustiniani among the patrons of Caravaggio important families such as the Barberini, the Borghese, the Costa, the Massimi and the Mattei.

But the episodes from his life during these early Roman remains unclear and disturbing. In 1597 he was asked to paint some paintings for the chapel Contarelli in St. Louis of France (“Vocation and Martyrdom of St. Matthew, St. Matthew and the angel”) that make it famous and disputed. In the latter work will provide a new version, because it was deemed grossly irreverent. From then until 1606, the story of Caravaggio is dotted with various cruel and violent events that overlap. On the one hand makes many important works emphasizing its fertility and creative power: to give one example, between 1600 and 1601 he painted the “Crucifixion of St. Peter” and “The Conversion of Saint Paul” in 1604 the ”Madonna of the Pilgrims or Loreto, in 1605 the” Death of the Virgin “, rejected by the religious of Santa Maria della Scala and instead purchased by the Duke of Mantua, on the advice of the young Rubens.

In the same years marked by this creative explosion, since 1603, one another without interruption to the police complaints, fights, processes: in 1605 Caravaggio took refuge in Genoa, having wounded a clerk in court. In May 1606, in Rome, a duel ends tragically with the assassination of his opponent (although he is still injured), murder that forced him to flee, first to Palestrina and then in southern Italy. Thus began the life of a fugitive, with alternating successes and misfortunes. In 1607 he went to Naples where he performs for churches and convents, some masterpieces like “Flagellation of Christ” and “Seven Works of Mercy.”
But do not stop his wanderings take him and indeed, we are in 1608, to Malta. The portrait of Grand Master de Wignacourt Alof is the other orders, particularly the great “night” of the “Beheading of St. John the Baptist, just kept in the cathedral in Valletta.
Caravaggio was received into the Order of the Knights, but news from Rome, on the grounds of his exile, cause an investigation and then yet another escape artist.

In autumn he went to Sicily. where, moving from one city to another with numerous examples of his genius: the “Burial of Saint Lucia”, performed in Syracuse for the homonymous church, the “Resurrection of Lazarus” and the ‘Adoration of the Shepherds “now exposed to Museum of Messina and a “Nativity”, preserved in the oratory of San Lorenzo in Palermo and stolen in 1969. Returning to Naples in October 1609, he is attacked and seriously injured. While his Roman patrons seek the grace. He is still recovering embarked in July of 1610 to the Papal States. Arrested by mistake at the border of Porto Ercole and released two days later, wandering along the beaches to the vain search for the boat that carried him there. Struck with fever, Michelangelo Merisi dies July 18, 1610 in an inn, in solitude, a few days before it was announced the approval of the request for clemency.

To better understand, the personality of Caravaggio show, in conclusion a summary profile of Gianni Pittiglio: “Romanticism has done nothing, that [based on biographies of the period. Ed] to create a myth in the twentieth century, as in many other cases, a myth that has been scaled down to fatigue. Even now the public knows Caravaggio, in a version less faithful, generated in those years. The result is an artist “cursed”, bohemian, with no consideration of context. Caravaggio is in fact a violent, but not it is remember that similar events in the same years are living figures similar like the Cavalier d’Arpino, Torquato Tasso, Giovanni Battista Marino, Ignatius of Loyola and many others; the alleged homosexual tendencies, of Merisi are not considered marginal factor in his personality as an artist (some are even the means of interpretation for many of his youthful paintings), as in most cases some of Leonardo, Michelangelo Buonarroti. But is atheism and ignorance of religious matters element further from the truth: the artist is simply due to the pauperism of Federico Borromeo with all that this entails; Caravaggio never deals with a religious theme without having in mind, sources, written or iconographic, which denoting, in him a culture of sacred texts over the average. ”